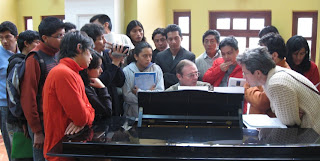 I now feel as though I have a second home in Ecuador , and I plan to return to this beautiful land in the very near future.”

Dr. Larry Barnes, professor of music at Transylvania University in Lexington, was composer-in-residence for the country of Ecuador in August. Barnes attended the new-year celebration in Cayambe and met with folk musicians there. In Ambato and Quito he gave a PowerPoint lecture on American popular music, and presented a live program of his original music, including RainSongs for flute, harp and rain stick; Behind the Golden Door for piano and electronics; and several selections from the film Euphoria for cello and piano. In Quito nearly 1000 attended the final concert, and due to the small size of the hall, the musicians graciously offered to present the program twice. Barnes also offered a two-day workshop for composers in Ambato and Riobamba on writing a popular song. 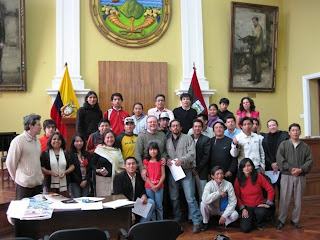 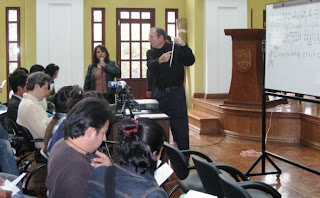 “I was overwhelmed by the response to my music and presentations, and by the generosity, friendship, and enthusiasm of this country’s people. I especially wish to thank my host Rommel Jumbo for his tireless efforts, all the hosts in each city who shared their homes and meals with me, and the students and teachers who treated me with the utmost respect. I now feel as though I have a second home in Ecuador , and I plan to return to this beautiful land in the very near future.”