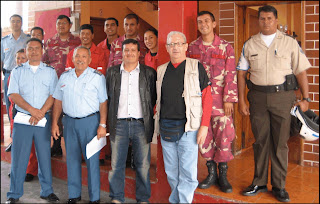 In February, Rankin, Ruthi, Roberta, and Donald Skinner spent three weeks in Ecuador. We delivered 3,400 toothbrushes, applied a new fluoride varnish that remineralizes enamel and dentin and causes teeth to absorb 200% more fluoride, and delivered sealant material to participating clinics. We recruited firemen, policemen and Red Cross volunteers to help us accomplish this large task. This was the first time we have had help and it was GREAT! We also attended the indigenous soccer tournament in Peguche, where my Compadre’s( Jaime Yacelga) team won the championship. The pregame show was three hours of dance and music. David Coffey’s group took another 2,200 toothbrushes, which have been distributed in Ibarra. We also shipped 5,000 toothbrushes to the Peace Corps to distribute to the victims of Tunguarahua. We are working towards a national program in dental health, but that is another story.

Following the Skinner family’s visit to Ibarra, the following article appeared in the local newspaper: 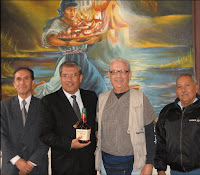 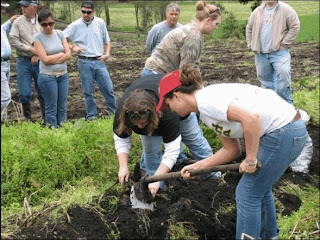 Each year WKU Agriculture sponsors an 11-day Study Abroad to Ecuador. This is the 14 year agricultural and business students have visited the highlands of Ecuador. This year 22 students and assistants David Coffey, Melissa Stewart and
Kristie Guffey dug potatoes, ate guinea pig, studied floral exportation, and enjoyed the fellowship of former and current Kentucky-Ecuador Partners of the Americas as hosts. Medical supplies and appliances and 2300 toothbrushes were also distributed to enhance current Partners projects.

Below is a statement from Natalie Denney about her second trip to Ecuador, this time without strikes by indigenous populations. Natalie is a senior business major and has completed study abroad excursions in Ecuador, India and Costa Rica….

My second trip to Ecuador with Dr. Coffey was simply amazing! It was interesting to see the reactions of the first time visitors that were in the group to the beauty of the Ecuadorian landscape, its people and growth. Some members of our group had never even flown. Additionally a student from Kuwait and one from El Salvador added variety to the group. Everyone enjoyed learning about a different culture and was surprised by the generosity and hospitality of the people.

I visited Ecuador for the first time in spring 2006, in just two short years significant change had occurred in numerous areas. The airport was much nicer, the hotel had expanded and changed décor, roads were better, and there were more restaurants and development. Quito was cleaner and the colors and designs of the textiles were different yet beautiful. The disco was loud and crowded but the style of dancing had become more Americanized! We visited several farms, including the delphinium plantation that I went to in 2006. Exciting to see was their expansion into other varieties of flowers, including several greenhouses of Gerbera Daisies. Next, we dug potatoes on Ricardo Cobo’s farm. For lunch we ate locro, the typical soup of the Ecuadorian highlands; it was delicious. We also visited the pottery project and made our host happy since we purchased many types of work. Dishes, vases and animals proved to be very popular.

A favorite of the trip was Jose Martinez’ dairy farm near Puyo, where everyone had to purchase boots to walk through the mud. It was quite an adventure walking through the fields, falling in streams and getting stuck in knee high mud! We appreciate the trials for farmers in the Puyo area. Miguel Castanel’s observations and fellowship were always fun. My highlight of the trip was revisiting the studio of local Quito artist Enrique Alvarez. Enrique is becoming famous for painting faces of Ecuadorians in a specific color, which he gets from the aura of the persons after talking to them. It was exciting to see his development and his work being implemented in a government billboard project. Rarely does one witness an artist becoming famous!