It was Sunday morning, and I awoke with butterflies in my stomach. One big difference in the cultures of South America and our home is that everyone here is passionate about futbol (soccer). They don’t so much like it, they seem to live for it. Leonardo, his 14-year-old son, his nephew and I had scored tickets for a playoff game for the national title between Nacional and Liga de Quito at the Estadio Olimpico Atahualpa. Even though we arrived two hours before game time, we still had to park about 2 miles away. Upon arrival at the stadium, I came to realize the fans are segregated according to their team of choice. In the end zones are the fanatics, with painted faces, everyone attired in their team colors. They have their own bands and spend the entire game dancing up and down in unison, singing and blowing whistles. It is hard to explain the excitement which accompanies a game like this; think the  South African fans. As soon as we entered the stadium, we felt the electricity in the air. We arrived very early, but the stadium was already about 80% filled. By game time, there wasn’t a seat in the house. Just imagaine—the end zone gangs had everyone worked into a frenzy, and there were 45,000 screaming fans.

The game actually started on time and right away I saw some of the best passing I had seen since the World Cup. The play was excellent and the defense was vicious. There were a total of 8 yellow cards. With 8 minutes left in the first half La Liga scored and the crowd went crazy. Of course, this got the opposing team started with the trash talk; we won’t get go into great detail about this as this blog is rated for a family audience.
Halfway through the second half La Liga scored again. Now, the crowd began threatening the referees’ very life, along with the usual descriptions of his manhood (or lack thereof).
A note: One thing of interest is that the air currents from the mountains seem to interrupt the flight patterns of many, many birds. All during the game, great flocks of birds would swoop down very low over the playing field, then sort of swirl around the stadium and swoop right back out again. 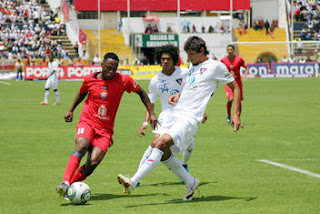 About ten minutes before the game ended, a swat team marched into the aisles between the two groups of fans. This is the only area of the stadium which is not surrounded by fences. The swat team shows up in full regalia—bullet-proof vests, helmets, shields and night sticks. These guys mean business! Each of the groups of fans had to exit the stadium through separate doors; then there were more cops outside to keep things calm. I have never seen such passion for futbol and felt privileged to have been to this game.  I believe it was Vince Lombardi who said “Winning isn’t everything; it is the only thing”. Perhaps had he been born in most any other country on the planet, he might have been like that soccer coach in England who said (something like) “Futbol isn’t a life and death thing; it is much more important than that”.