The following article on Partners members Ruthi and Rankin Skinner appeared in Perspectives, a quarterly magazine published by The University of Kentucky            College of Dentistry. 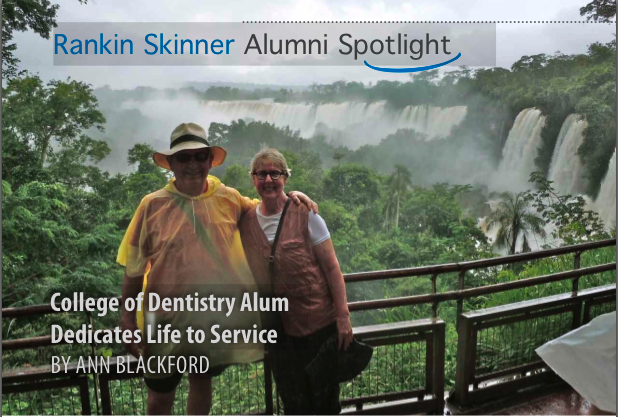 Rankin Skinner was just a young boy working on his grandfather’s farm when the spirit of volunteerism and helping his neighbors was first instilled in him, as he saw neighbors helping neighbors as needed sowing, growing and harvesting crops.

Skinner, a 1969 graduate of the University of Kentucky College of Dentistry, has dedicated his life – and his passion for dentistry to the people of Kentucky and far beyond.

“I learned you can’t just be involved in your own life, you have to help out others in need,” Skinner said. “A life of service is where you are happiest and it’s a part of my life.”

Skinner’s career in dentistry began with the U.S. Navy right after graduation from the College of Dentistry until he went into private practice in Winchester, Kentucky in 1971. Over the course of the past 40 years, Skinner has been actively involved with countless volunteer organizations, including Partners of the Americas, since 1985.

Partners of the Americas is an international network that connects individuals, volunteers, institutions, businesses and communities to serve others through lasting partnerships. Currently, Partners has 120 volunteer chapters linked in 60 partnerships. Chapters in the U.S. form partnerships with chapters in countries or states in Latin America and the Caribbean. Each chapter is a private, non-profit institution that works to improve the quality of life of others. One such U.S. chapter is the Kentucky/ Ecuador Partners.

In 2002, Skinner and his fellow volunteers with Partners started the Kentucky/Ecuador Dental Sealant Project, working with 15 clinics in the capital city of Quito and another 15 clinics in Ibarra and surrounding communities. Ibarra is Winchester, Kentucky’s Sister City.

Dental decay in Ecuador is in the 85 percent range. In the United States, the national average is 22 percent and in Kentucky it is about 50 percent, with significantly higher rates in some areas. The goal of the Kentucky/ Ecuador Partner Sealant Project is to significantly improve children’s dental health through education, regular cleanings, and fluoride varnish and dental sealant application.

Skinner’s group hastrained 65 dentists to place sealants and later, fluoride varnish in each of these cities. They provided the material and the government dentists placed it and created a partnership with participating schools, local governments and most importantly, parents. After five years, a dramatic 50 -78 percent drop in decay was noted, from responding clinics.

Skinner’s volunteer work with Partners of the Americas is acually a family affair that involves his wife, Ruthi; their son and daughter-in-law, Ian and Jill; their daughter and son-in-law, Erin and David Smith; and Rankin’s brother and sister-in-law, Donnie and Roberta. The family was honored as the FamilyAward Winners for 2009 by United Way of the

Bluegrass for their outstanding work with the Clark County Dental Health Initiative, locally in Clark County and abroad through Kentucky- Ecuador Partners. The dental initiative in Clark County came about as a result of publicity on their work in Ecuador, and in response to concerns about the dental health of Kentuckians.

Skinner said it was impractical to believe that they could do sealants in all the schools, so the plan was to apply Premier Dental’s new Fluoride Varnish with Amorphous Calcium Phosphate (ACP), a product he describes as ‘the best preventive tool for caries in my lifetime,’ on all preschoolers through 5th grade (nearly 3,000 students), twice yearly. This group was selected because this is the range of ages when children get their permanent teeth. Every student in the public school system also receives a new toothbrush and toothpaste kit every year for a total of nearly 6,000 kids.

Annually, a Decayed, Missing, Filled, Sealants (DMFS) Survey is done on all 6th graders. This allows Skinner’s group to measure all these factors on an annual basis to see if they’re having a positive effect.  Dental exams are also done annually on all students, preschool-5th grade and reports are sent hometo the parents on the dental health of their child.

The Clark County School system now has a strong oral hygiene educational program in place. Skinner says the program is so successful because the entire community has become invested in this endeavor. “Everybody came on board after seeing the results of our work and wanted to be a part of it,” he said. “When you’re doing something for the right reason, things just come together.” The success of the Clark County school dental program just happened to catch the attention of Clark County resident and dental health advocate, Jane Beshear, wife of Governor Steve Beshear.  She heard about Skinner’s work in Ecuador and Clark County through one of Skinner’s dental volunteers and soon involved the Governor.

Could something be done in Appalachia toimprove dental health like what was done in Clark County? Jane Beshear obviously thought so and went after grant money to support the work before she approached the UK College of Dentistry, well known for their extensive work providing dental care in Appalachia.

And so began the process of obtaining the $1 million grant through ARC and $250,000 in state general fund dollars so that approximately 25,000 Kentucky children in Appalachia will receive preventive oral health services through a new pilot program called Smiling Schools.  As part of the Smiling Schools program, the Oral Health Program in the Department for Public Health will also conduct outreach in eastern Kentucky to help increase public awareness of the importance of children’s dental health.

Robert Kovarik, division chief in the Division of Public Health Dentistry at the UK College of Dentistry, said the project is important because ultimately, the problem of poor oral health in our children needs to be addressed by preventing oral disease. This will take new preventive techniques as well as an increase in oral health literacy, both of which are addressed in this new project.

“We were anxious to participate in this new state public health initiative as it is this kind of collaborative model that can really make a difference to children in Kentucky,” Kovarik said. “This effort is a combined effort of private practitioners, government (health departments) and the University of Kentucky.  Each brings special skill sets to the equation and the result is a benefit to many children.

The UK College of Dentistry will perform oral exams on a sampling of children in the pilot project prior to the first varnish application to document the initial condition of their teeth. The second treatment is applied four to six months later. Following two fluoride varnish treatments, the children will again be examined to determine the effectiveness of the varnish in stopping decay.

All children in the selected schools will be given the opportunity to have a dental screening. The fluoride varnish will then be painted onto children’s teeth and takes less than a minute to apply.  The varnish treatment is painless and comes in a variety of flavors. The fluoride varnish prevents decay, slows the progress of existing decay and reverses the beginning steps of decay.

“Our young people already face a range of issues that distract from learning without having to worry about an aching cavity or overall poor dental health,” said First Lady Jane Beshear. “The Smiling Schools program will not only improve our children’s current dental health, but teach them the value and ease of maintaining quality dental care practices as they grow to be healthy adults.”

Skinner is a true testament to the spirit of volunteerism and what can be accomplished when a group of caring individuals come together for a good cause. In Skinner’s own words, “when you are doing something for the right reasons, things just come together.”